Scorpion’s Glow & 12 Other Facts About These Amazing Arachnids

Santiago ran into the house, yelling that a scorpion had bitten him! He was panicked and worried that he was going to die. Finding his Mom, he screamed, “A scorpion stung me! What do I do?”

Santiago’s Mom, having been through this a number of times before, sat Santiago down and told him that she’d get some ice cream for the sting. Santiago thought about it and had to ask, “Do I put the ice cream on the sting? And, don’t I need to go to the hospital?”.

Most scorpion stings hurt a lot but are not deadly. In many cases, the pain only lasts for a few hours. In some, it can last days. Since Santiago didn’t live where any super poisonous scorpions lived, his Mom knew he just had to wait out the pain. Ice cream always helps.

It’s rare for people to die from a scorpion sting, especially here in the United States. Out of the roughly 2,300 scorpion species worldwide, only about 30 are poisonous enough to kill a person. 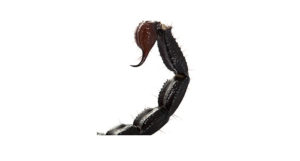 Here in the United States, we only have one scorpion with potentially deadly venom. That’s the Arizona Bark Scorpion. This scorpion lives in the desert southwest. Still, in most cases, the sting is excruciating, but death is uncommon. No surprise, young children and older adults are the most susceptible. There is an antivenom, so, if stung, seek immediate medical attention.

Under UV (blacklight) light, scorpions glow an eerie blue/green color, and it’s fairly dramatic. It’s not known why scorpions have this trait, but one theory is that it helps them find places to hide even when it’s very dark.

This is not only true of all scorpions, alive and dead, but scientists have seen fossils millions of years old that still glow.
Scorpions glowing is definitely something to see, especially… just before you Eat the scorpion!

Scorpions (and tarantulas) and are considered food in many countries. They are an essential source of protein. In rural areas, adults and children will go hunting for them. In more urban areas, scorpions are bought and sold as snacks.

Although scorpions are hard to find during the day (you may find them under rocks, bark, etc.), they are nocturnal and hunt at night. Using UV flashlights on dark nights, they literally light up when found. To catch them, seasoned hunters usually wear gloves and pick them up by their tail.

It may come as a surprise but, you can eat them stinger and all. A short time after they die, the poison in the venom becomes inert and, therefore, cannot harm you.

Scorpions Can Live in Harsh Climates

Every continent except Antarctica and New Zealand are home to scorpions. They exist in the harshest of climates, in places that would kill many other animals.

Scorpions can live in temperatures up to 120 degrees, and they can survive being frozen. Not always, but in most cases, frozen scorpions thaw and are revived. Scorpions are one tough animal!

Scorpions Have No Bones

As is true with all arachnids, scorpions do not have any bones. Instead, they have a tough exoskeleton made of chitin. No surprise, this is also true with other arachnids like spiders, mites, ticks, and even crustaceans like shrimp, crabs, and lobster.

Because the scorpion’s exoskeleton does not grow the way skin does, scorpions shed their exoskeleton half a dozen times during their two to six year lifespan (some live much longer). This scares many first-time scorpion pet owners because the shed skin looks like a dead scorpion.

Scorpions Can Live Without Oxygen For Up to 48 Hours

Amazing, isn’t it? Scorpions have what is called “Book Lungs,” which are layers of membranes in their exoskeleton that hold oxygen for extended periods. Because of this, they can survive without oxygen for up to two days.

So, if you see a dead scorpion in your swimming pool, be cautious because it might not be dead at all.

Scorpions Can Live Without Food For a Year

If food is scarce or weather conditions restrict their ability to hunt, scorpions go into a depressed metabolic state called brumation, much like hibernation in warm-blooded animals. Because of their ability to brumate, scorpions can survive without food for up to a year.

Unlike hibernation, they can come out of it easily when hunting is an option again.

Some Scorpions Reproduce Without a Mate

Most scorpions mate intersexually, although some species do not need a mate to reproduce. In scorpions, this asexual reproduction is called parthenogenesis.

In most species, males are required, but they do need to be cautious. The female scorpions may decide to devour their mate. Sometimes, even before the mating ritual begins.

Scorpions do a “dance” before mating. So, if you’re a male scorpion, you better be a good dancer, or your mate just might eat you alive!

Scorpions Carry Their Babies on their Back

Scorpions give live birth and have a litter that averages from 20 to 30 baby scorpions, although some have been known to have nearly 100 babies.

Baby scorpions are called scorplings. The mother scorpion carries the scorplings on her back for a week or two because scorplings are born with a very soft shell. The mother gives them a ride until their shell hardens.

Scorpions will eat just about any living thing they can catch and kill. They’re not picky eaters. They’ll eat any animal they can catch from ants and spiders to birds and even rodents.

They also view their own kind as fair game. Scorpions will eat other scorpions when necessary. They’ll eat the easy prey first but, push comes to shove, they’ll even eat their mate.

Scorpion venom is one of the most expensive liquids in the world worth around one to two million dollars per gram. If you buy it in bulk, you can get a gallon for a cool forty mil.

There are two key reasons why it’s so expensive.

First, scorpions can only produce a small amount of venom at a time, and it takes time for the venom to be replenished once it’s been used (or milked by a scientist). That’s why scorpions tend to run and hide before standing and fighting. If they use their venom on a predator to escape, they may not have enough to use in procuring their next meal.

The other key reason is that scorpion venom is showing great promise in medical research. A protein (a peptide) derived from chlorotoxin in the venom shows promise for Lupus, Rheumatoid Arthritis, Multiple Sclerosis, and Cancer.

Although the venom is extremely expensive, once a scientist identifies a compound, they hope to synthesize it for commercial use. Researchers at Stanford University recently synthesized compounds that could help fight bacterial infections. There’s a lot more research going on with great potential for the future.

Scorpions are Not Insects

Scorpions are animals that are a member of the arthropod phylum, which includes animals with exoskeletons. Arthropods are the largest phylum in the animal kingdom. About 84 percent of all known species of animals are members of this phylum.

There are close to 2,000 known species of scorpions worldwide. The United States is home to around 100 species.

Scorpions have been around longer than we have. Fossil records date scorpions existence to over 400 million years.

Earlier this year (2020), the oldest known scorpion fossil found so far dates more than 437 million years and was discovered near Waukesha, Wisconsin. Scientists named the species Parioscorpio venator and theorize that it may have hunted on land and sea.

Scorpions make great pets. They do not need a lot of room to roam, they only eat once every week or two, and they can be handled (with care). Although most scorpions only live to be a few years old, captive scorpions have been known to live up to 25 years.

You can feed pet scorpions just about any live insect available at the pet store. Crickets, mealworms, and superworms are common. Although there is no way of knowing, many owners believe that they like variety. For their health, a variety of insects is a good idea.

You can feed pet scorpions bugs you catch in the wild, but you need to make sure they are caught far away from any place that pesticides, herbicides, or insecticides have been used.

As you can see, scorpions are amazing animals

For Santiago’s birthday, his Mom surprised him with a huge Asian Forest Scorpion. They’re so cool! They’re jet black with big huge pincers.

Santiago loves his scorpion. His birthday present really took the sting out of being stung.

×
Why Choose to Autoship?